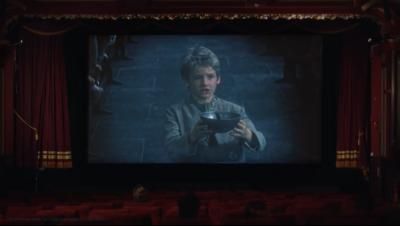 Have you seen the latest Lloyds Bank ad about Club Lloyds Current Account? Then you've seen some of Camstage Ltd.'s stage curtain work at the Gate PictureHouse in Notting Hill, London. The ad includes shots from the Oliver Twist movie on a screen at The Gate.

PictureHouse often chooses Camstage, a leading UK contractor for professional theatres and cinemas, for updates to its facilities. For instance, Camstage has installed the screen and curtain hardware at The Gate over the years.

But it's the bespoke curtains that stand out -- and were quickly recognized by the woman who suggested the look. Picture House got permission to replace the once-gold curtains at the historical cinema. The entertainment company then commissioned Camstage to come up with an over-the-top theatrical curtain theme.

Camstage's Sue Camastra designed the curtains, which included selecting the type of material, style of the curtains and color to match the theatre's grand interior.

"I offered them burlesque," Sue said. "They loved the drawings and style along with the colour scheme."

The first time she saw the bank ad she knew those were the curtains she designed for The Gate in August 2010.

"Those were very bespoke curtains," Sue said. "Of course I would recognize them."

Camstage also features the stage setting on its website in several places, including an article about the types of stage curtains.

The curtains at The Gate are just one example of Sue's ability to get into the mind of a client and transform thoughts into a remarkable finished site. She also was key to the redevelopment of Royal Air Force Lakenheath's theater, and the American Embassy in London.Bank of Lloyd began in 1765 as a private banking business in Birmingham. Today the financial services group is focused on retail and commercial customers - with millions of customers in the UK, and a presence in nearly every community. Every bank ad is on YouTube.

Gate Cinema, owned by PictureHouse, was built in 1861. An application was filed in 1909 to convert the ground floor of the Golden Bells Coffee Palace and Hotel in Notting Hill Gate into the Electric Palace Cinema. The cinema opened in 1911. The Gate has undergone numerous changes, including ownership, since then. The auditorium was (and still is) a riot of Edwardian plasterwork, with a heavily coffered ceiling. It is a perfect setting for the curtains. Picturehouse, through a previous company, bought the cinema n 2003. It opened after a remodel.

Picturehouse Cinemas was formed in 1989 to challenge the multiplex model and provide cinemas that serve their communities in city-centre locations. In 2014, the independent cinema operator had 19 sites plus The Gate. In December 2010, the company added a theatrical distribution arm, Picturehouse Entertainment. Its goal is to release up to six feature films every year. It also distributes alternative films internationally.