Screens theatres and multi use spaces 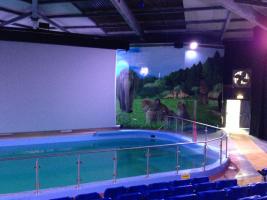 Installing a Dehnam roller screen is old news to almost every crew member at Camstage Ltd,  UK's leading supplier and installer for cinemas, theatres, churches, schools and other buildings. Installing the specialty screen before an audience of sea lions - now that was new to everyone who worked on a job at Woburn Safari Park in Bedfordshire, England.

But since July 2012, visitors to the Worburn Safari Park can see a unique combination of a live sea lion show and High Definition 3D adventure films. Camstage installed a Denham roller screen at the 320-seat Sea Lion Cove, making Woburn the first safari park in the UK to combine a live action animal demonstration with cutting edge 3D cinema technology. Camstage used Harkness 3D-screen material in a bottom Denham roller which slides from the ceiling to the floor -- just inches from the sea lion pool during each show. The large screen meant that steel girders had to be added to the ceiling.

“We hope that through the extraordinary advances in 3D technology we can offer families another great adventure with the wildlife, whilst also highlighting Woburn Safari Park’s commitment to education and conservation,” said Drew Mullin, the general manager at the safari park.

The UK park project was truly a UK project because it included these UK firms: Simworx, a recognized leader in 3D projection and surround sound technology; Harkness-Screens Ltd, known for its screens and Camstage also is known for its service and creating solutions for challenges some say can't be done.