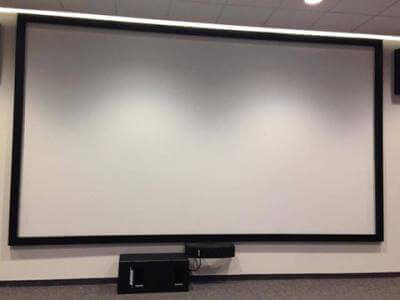 Camstage Ltd. returned to Torpedo Factory Group for a fast turn-around job. In two days, a crew replaced a screen with a seamless one for a client of Torpedo's AV group.

Torpedo decided a seam in its big fat elastic screen would not work for the company's AV work. It needed a fast solution to avoid missing its deadlines.

Camstage was able to arrange for a new screen, bypassing the usual six-weeks delivery time for a screen. The crew quickly removed the screen, created a new frame and stretched the new screen.

Camstage was at Torpedo in March. for a job that included fitting a curtain motor and masking motor. Crews also installed a non-perforated white screen with maskings and recabled all systems.

Lidl is one of the leading discount supermarkets in the UK, with 600 stores and 13,000 employees.