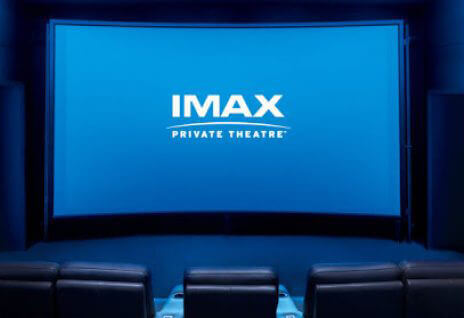 Camstage Ltd., a leading supplier and installer of cinema technology in the UK, is watching the developments closely.

The company saw the effectiveness of 3D on a large home TV during its work during the London Olympics in 2012, said Franco Camastra, director of Camstage. At the request of Olympic Broadcasting Services, Camstage built a moveable projection screen for Panasonic's unveiling a its newest HD TV.

He sees the IMAX home theatres a natural fit for the firm which has installed top-of-the-line home cinemas at the Getty estate and other homes of multillionaires.The screens will fit in a regular room unlike the private theatre systems that are so large they often need specially built rooms.

In China, each luxury theatre will cost at least $250,000 (£157,000), Reuters reported. But IMAX representatives would not specify the price, saying only that it would be less them its current Private Theatre system, which retails for $2 million.

China also is second worldwide in the movie market and growing while Hollywood studios are struggling with United States box-office receipts.

Chinese home cinemas also could help foreign film makers and producers avoid China's tightly controlled distribution of films. Only 34 foreign movies are allowed to be shown every year in cinemas nationwide, with at least 14 in 3-D or IMAX format. There are no limits, however, on what can be watched at home.

Russia, Hong Kong and the Middle East are the next targeted markets, the companies said.

"As content viewing in the home is constantly improving, we wanted to stake out an entirely new position in the premium home theatre market," TCL's chairman Li Dongsheng said in a statement.

TCL estimated that the Chinese home theatre market will grow 20% a year over the next five years.

IMAX has seen its popularity grow since it premiered its first 3D system in 1986. Three-D films are growing in popularity, with more than 80% of audiences for the recent blockbuster film Gravity opting for the 3D format.

Shooting a film with dedicated Imax cameras used to cost more than £6m before the company developed a way to convert standard films to Imax format using algorithms for less than £1m, IMAX said.

James Cameron's Avatar in 2009 proved to be the first mainstream 3D box office success, with about $250m in Imax theatres.

IMAX also has found a growing market, earning 16% of its revenue in China with 131 screens.

In July 2013, IMAX expanded an agreement with China's Dalian Wanda Group Corp. to build up to 120 more screens in China.

TCL is one of the largest global TV manufacturers and distributors. Headquartered in China, the group operates its manufacturing plants and R&D centers.