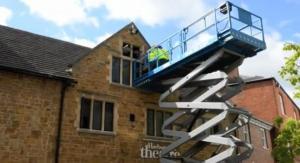 A Market Harborough cinema turned to Camstage Ltd. for its latest improvement.

The community-owned Harborough Theatre selected Camstage, a leading UK cinema supplier and installer, to install a five metre-long cinema screen. A 10-metre scissor lift  put the screen in the historical building on August 11, 2014.

A Camstage crew finished installing the roller screen the next day.

The Harborough Mail documented the event with an article and video that includes an interview with theatre trustee Ed Coveney and footage of the 10-meter scissor lift in action.

The bespoke screen, which is 25 percent bigger then the old screen, came from the well-known Screen International. Camstage is the main dealer for the Italian screen maker in the region..The new screen also will showcase a better image to patrons. The theater already had installed a 12-speaker surround-sound Dolby system and digital projector

The old screen was walked over to the nearby Market Harborough Congregational Church fpr its use.

The Market Harborough Theatre Society oversees the theatre, which shows live broadcasts and   some films. Community members purchase two-year memberships as well as pay admissions. The registered UK charity is based in a 1932 building that was used as a cycle shed and store for a local corset factory.

Besides the 117-seat, tiered auditorium, the building has a lounge that offers an opportunity for a drink prior to a performance.

Euroscreen S.r.l, known as Screen International, was born in 2001 as a manufacturer of high quality projection screens.