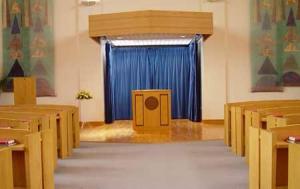 Camstage returned to the Bedford Crematorium to stop the erratic behaviour of the curtain system.The system is old and not in production any more. Parts are unavailable even though the system needed a major refurbishment.

Camstage supplies many crematoriums with curtains and tracks as well as service contracts.

In Bedford, Camstage found a solution to make this work while the crematorium awaits funding for a new system. The crew adapted the tracks with pulleys and cable diversion.

The crematorium, which was opened in July 1995, is located at Norse Road Cemetery.

The chapel has several interesting features and can easily accommodate 150 mourners. The wall hangings situated at either side of the catafalque were designed by Sharon Ting and are made from hand dyed silk. The pews were designed and constructed by Toby Winterton, an East Anglian craft based artist.

Camstage was formed in 1989 and is known as a leading UK supplier to the cinema and theatre industries. Products include projection screens, stage curtains and acoustic wall panels needed in cinemas, theatres, churches, crematoriums, educational facilities and other venues. Services include design, installation and maintenance.

The company is looking to install projectors and moveable projection screens at crematoriums as more people want to share photos and videos of their loved ones at services. Crematoriums, also known as funeral homes in some parts of the world, are offering services via Skype and other services so family and friends can pay their respects digitally.