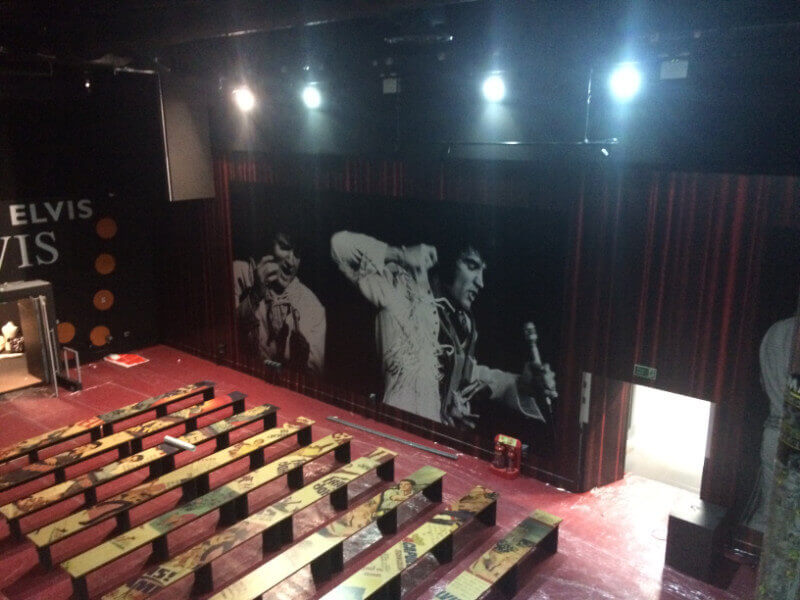 Elvis Presley rocks, rattles and rolls bigger then life in England thanks to the work of Camstage Ltd. The unique exhibit of 300 items in London's O2 Arena tells the story of the American icon and is anchored with a 20-minute collage of Elvis' life on a free standing professional screen installed by Camstage.

The collection of video, audio and pictures was designed by staff of Elvis' estate, Graceland, specifically for the exhibit's nine-month exhibit in London.

A friend of Camstage Ltd. posted on Facebook: "I thought it was really well done and enjoyed it. I am going to go again before it closes in August."

Camstage remains one of the UK's leading installers, maintainers, and designers of screens and other stage assets for professional cinema and theatre as well as other performance facilities.

The temporary screen at the O2 also became an on-site design challenge. Camstage quickly discovered the screen could not go on the walls, now covered with wallpaper that mimicked curtains. A wall-mounted screen was converted to a free-standing framed one using scavaged parts. The montage now airs on an 8m x 4.5m screen.

A spokesman said: "It wasn't a simple install and your team had to improvise with materials on-site and work out a freestanding solution, as opposed to surface fixed! Your guys were fantastic Sue, the screen works a treat. A pat on the back all round job well done and a happy client!"

Camstage also found the site a good one. Perhaps because there are some Elvis fans at Camstage. "I loved working there," said Franco Camastra, co-director of Camstage.

"It was surreal watching the stuff get uncrated in front of me."

On a break, some of the Camstage workers looked around, seeing how others were prepping The O2 for the Elvis at The O2: The Exhibition of His Life. That break included watching Elvis' blue army suit and other clothing being unpacked. The crew also checked out the cars and motorcycles. The exhibit also will include the pink Cadillac from Graceland for a short time, tentatively 12 June - 31 August.

The presentation on the screen includes rare clips of the rock 'n' roll 1950s star. The exhibit stays open until 31 August 2015. It chronicles the rise of the rock ‘n’ roll icon and how Elvis impacted popular culture around the world through his music, movies and personal style. From his humble beginnings to his meteoric rise to fame, the exhibition will explore Elvis mania that first swept America and then the world.

Camstage also helped with the staging of Mamma Mia and the USA basketball team game at The O2.

The O2 is the world's most popular music and entertainment venue. The complex of indoor and outdoor facilities, including bars and restaurants, has hosted some of the biggest names in music, film, and sports right in the heart of London.

Camstage was formed in 1989 and is known as a leading UK supplier to the cinema and theatre industries. Products include projection screens, stage curtains and acoustic wall panels needed in cinemas, theatres, places of worship, crematoriums, educational facilities, home cinemas and other venues. Services include design, installation and maintenance. Email us anytime at info@camstage.com or call +44(0) 1727 830151 Mondays through Fridays 9 am-5 pm GMT for more information.