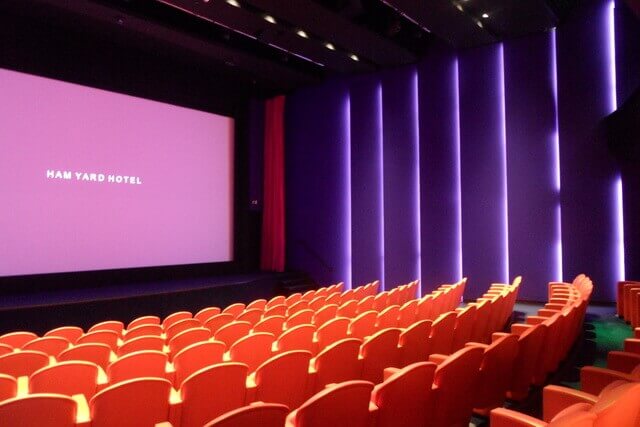 Weeks of planning and presentations led to the prestigious Firmdale Hotels selecting Camstage Ltd. to pull together important elements of a luxurious cinema.

Camstage is installing the cinema's screen, curtain hardware and audience/staging lights in the under development Ham Yard Hotel in London's Soho just behind the Piccadilly Circus.

The Ham Yard Hotel, on a three-quarter acre site, will have 90 bedrooms and suites, 24 apartments, 13 specialist retail sites and a restaurant/bar with outdoor seating.

The 176-seat plush theatre/cinema will include a stage, VIP balcony, and green rooms. The cinema also can be used for conference meetings and entertainment.

Camstage will install a screen plus frame with an independent moving masking system, a curved chain track and lighting bars. The bars provide the lighting for the room and effect lighting for productions. The track will hold curtains and the masking system allows a variety of film sizes to show on the screen.

Calls, site meetings, and CAD drawings between Camstage and Firmdale started in March 2013, and led to a signed contract in mid Novemer. Site preparation for the Camstage work began in early December and is expected to be done in mid-January. A crew will return in February for a last-minute check when other vendors complete their parts of the plush private screening room.

Firmdale has included private screening rooms in its other hotels, including the Crosby Street Hotel. The boutique hotels offer a variety of events, including film screenings and pre-screenings, as well as sessions with directors, actors and actresses.

For example, recent events at Firmdale's Crosby hotel have included:

Camstage, which has created small and large screening rooms for businesses and private residences, is pleased to be chosen for this luxury project in London.

"We are honored to work with people and an organization that obviously appreciates how the right screen and surroundings heightens the experience of viewing films," said Franco Camastra, director of Camstage.

"We are excited to work with Firmdale Hotels and hope it is the start of a long relationship."

The hotel is slated to open in May 2014. The £90 million, 150,000 square-foot development includes six big oaks in a center courtyard and an undergroound car park. It is being built on a bomb site, not used since the Blitz nearly 40 years ago.

The development includes a gym, a spa and an organic garden on the roof.The London hotel also will offer several private event areas and an imported 1950s 4-lane bowling alley complete with bar and dance floor.

Firmdale Hotels, owned by Tim and Kit Kemp, owns seven boutique hotels in London and one in New York. Ham Yard will be its 8th in London. Kit Kemp is the interior designer and Woods Bagot is the architect. The award-winning Firmdale hotels include the Haymarket Hotel and Covent Garden Hotel in London and the Crosby Street Hotel in New York.

Camstage was formed in 1989 and is known as a leading UK supplier to the cinema and theatre industries. Products include projection screens, stage curtains and acoustic wall panels needed in cinemas, theatres, churches, crematoriums, educational facilities and other venues. Services include design, installation and maintenance.