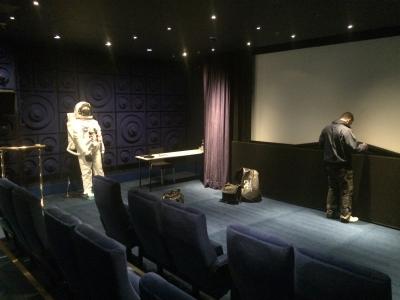 Camstage Ltd., a leading UK cinema installer and supplier, has added another small but classy cinema to the company portfolio. Patrons will see Camstage's work at the fashionable Mondrian London, a hotel oepning September 30 at Sea Containers on the Thames.

The  includes a 56-seat cinema as well as a rooftop restaurent within 20,000 square feet of food, beverage and spa outlets and more then 5,500 square feet of space for meetings, groups and special events.

Marketing materials say the cinema is designed to attract the film community, as does the original Mondrian in West Hollywood. The Mondrian London is the Morgan Hotel Group's first hotel outside of the United States.That connection is emphasized with a a hotel theme of cruise ship transaltanic travel. The room are patterned after ocean liner cabins and ship's hull running through the lobby to the riverfront.

The Morgan group worked with Design Research Studio under the creative direction of renowned British designer Tom Dixon to renovate the Sea Containers building, an office building that was originally designed as a luxury hotel in the 1970s. The hotel is in the trendy South Bank district and aims to take advantage of nearby attractions such as the Borough Market. It also is designed to also draw locals, offering a rooftop bar with drinks inspired by the wild plants of Britan, spa suites, and a variety of meeting spaces equiped with the latest technology equipment.

The company's web site describes the hotel as capturing the "essence of the original building, exuding 1920s cruise ship glamour integrated with the modern twists and sophisticated design for which the Mondrian brand is known." The New York Times In Transit blog quotes Alan Phillips, chief marketing officer for Morgans Hotel Group. “When you look out of the building, it’s like you are looking out of a ship. Phillips also is quoted as saying “We are a hotel for creators.”

Camstage director Franco Camastra is proud of the work the company' did to create a perfect screening experience. Camstage was formed in 1989 and is known as a leading UK supplier to the cinema and theatre industries. Products include projection screens, stage curtains and acoustic wall panels needed in cinemas, theatres, places of worship, crematoriums, educational facilities, home cinemas and other venues. Services include design, installation and maintenance.