Brindley gets full treatment by Camstage 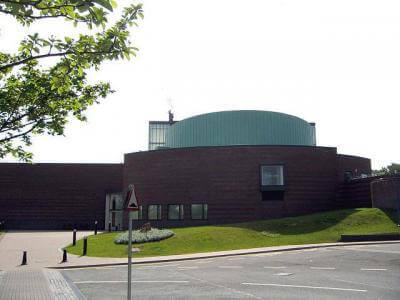 The Brindley, which is set to celebrate its 10th anniversary in September, asked Camstage to repair a roller screen in the facility's cinema.

The UK-based company quickly answered the call for help. Camstage, which often supplies and services the cinema industry saw the community arts centre would benefit from a complete service. The theater agreed, which means Camstage inspected all moving parts on the screen It  replaced worn components and did  routine maintenance. The work comes with a year's warranty.

"Our company's motto is 'when the show must go on'," said Franco Camastra, director of Camstage. "Offering full service instead of just fixing a broken part helps us help companies stay open for films, plays and other multimedia."

A million people have attended shows at The Brindley since it was founded in 2004. The award-winning facility in Runcorn, Cheshire, England, includes:

Camstage was formed in 1989 and is known as a leading supplier to the cinema and theatre industries. Products include projection screens, stage curtains and acoustic wall panels needed in cinemas, theatres, places of worship, crematoriums, educational facilities, home cinemas and other venues. Services include design, installation and maintenance.